Circular Economy is a strategic concept based on the prevention, reduction, reuse, recovery and recycling of materials and energy. 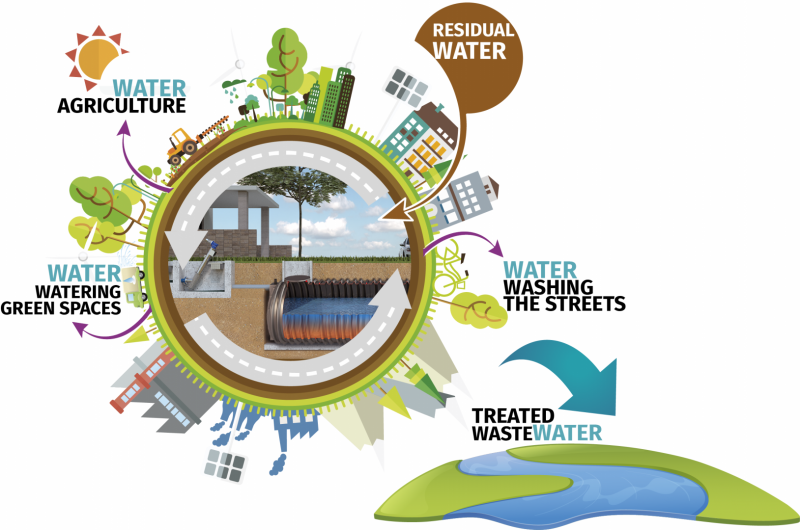 Replaces the “end-of-life” concept of the linear economy with new circular flows of reuse, restoration and renovation. With the threat of unavailability of natural resources, it is essential for society to move to a greener and more sustainable economy, based on a circular business model.

In other words, an economy where materials are preserved, restored or reintroduced. With economic benefits for suppliers, users and environmental benefits resulting from less extraction, movement of raw materials, reduced waste production and reduced emissions.

WATER IS A PRECIOUS FINITE RESOURCE

Only 3% of the water on Earth is suitable for human consumption and irrigation. In the Mediterranean area, about 20% of the population lives with difficulties in accessing water and in summer more than 50% of the population is affected by its scarcity.

In Portugal, only 65% of what is caught is actually used, and reuse is still residual when compared to other Member States.

When compared to alternative sources of water supply, such as desalination or water transfer, the reuse of water requires less investment and energy costs, also contributing to reduce greenhouse gas emissions.

The reuse of treated wastewater as an alternative source of water supply is currently recognized and incorporated into international, European and national strategies.

The use of unconventional water resources through recycling and reuse can support the provision of safe, available and affordable water, reducing energy needs, recovery costs and environmental impacts. Therefore, it is an essential component in sustainable water management.

It is in this context that the ECODEPUR® WATER FACTORIES, are an essential contribution to the new concept of Circular Economy, allowing to obtain a reliable water supply, where it is not limited to the discharge in treated water receiving medium, as is the case possibility of reusing water for different applications.

They are a new source of water that requires less investment and energy costs, when compared to alternative sources of water supply, such as desalination or water transfer, also contributing to reduce greenhouse gas emissions.

Excessive water intake is a major cause of water stress. The main pressures of water consumption are concentrated on irrigation and domestic demand, including tourism. The 2007 Communication on water scarcity and droughts made it clear that water scarcity and drought events are likely to be more severe and more frequent in the future due to climate change and population growth. Over the past thirty years, droughts have increased dramatically in number and intensity in the EU and at least 11% of the European population and 17% of its territory have been affected by water scarcity to date.

The potential role of treated wastewater reuse as an alternative source of water supply is now well acknowledged and embedded within international, European and national strategies.UN Sustainable Development Goal on Water (SDG 6) specifically targets a substantial increase in recycling and safe reuse globally by 2030. Water reuse is a priority area in the Strategic Implementation Plan for the European Water Innovation Partnership, and maximizing water reuse is a specific objective of the Communication "Project to protect Europe's water resources".

The reuse of treated wastewater can provide significant environmental, social and economic benefits. According to the Blueprint, water reuse can improve the status of the environment quantitatively, relieving the pressure by replacing abstraction and qualitatively, relieving the pressure of UWWTP discharge to sensitive areas. In addition, when compared to alternative sources of water supply, such as desalination or water transfer, the reuse of water generally requires less investment and energy costs, also contributing to reduce greenhouse gas emissions.

Back Home
Ask your Budget